Today is a very traditional and somewhat quirky 古怪 (gǔ guài) holiday in the United States, not for any religion or political figure, but for the weather!

Yes, you read that right.

Every year on the 2nd of February, a large group of locals in Punxsutawney (ˌpʌŋksəˈtɔːni), Pennsylvania, gather to see if a humble groundhog 土拨鼠  (tǔ bō shǔ) will see its shadow or not.

According to folklore 民间传说 (mín jiān chuán shuō), if it is cloudy when a groundhog emerges from its burrow 地洞 (dì dòng) on this day, then the spring season will arrive earlier, some time before the vernal equinox 春分 (chūn fēn); if it is sunny, the groundhog will supposedly see its shadow and retreat back into its den, and winter weather will persist for six more weeks.

Thus, Groundhog Day 土拨鼠日 (tǔ bō shǔ rì) was born some time in the 18th century, originating from ancient European weather lore, and the tradition continues to this day. Although it’s not a federal holiday, millions of people rely on this rodent’s prediction.

We love this groundhog so much that we’ve even given him a name: Punxsutawney Phil, or just Phil, for short. He lives in a fictional burrow called Gobbler’s Knob and every year he and his descendants gain national media attention, sometimes with thousands of people in attendance. But there’s been a controversy in recent years. Although the organizers of this annual event claim that Phil’s accuracy is more than 90%, scientific research shows that his predictions are really less than 40%. Oops. 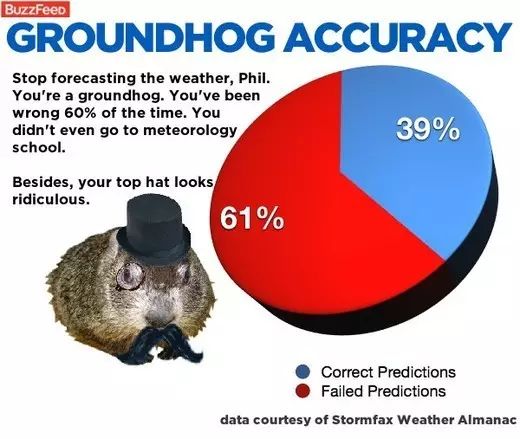 But that’s no fun! Remember, in cultures around the world, what’s traditional doesn’t always make sense…

Anyways, be sure to check the forecast online to see whether or not he saw his shadow this year!

Phil was a friendly fellow who flew to Punxsutawney

This holiday is also the basis for Bill Murray’s cult classic “Groundhog Day”《土拨鼠之日》(tǔ bō shǔ zhī rì)… Because the Phil the Groundhog sees his shadow, ol’ weatherman Bill has to relive the same day over and over again, this term becoming a colloquialism for deja vu 似曾相识的感觉 (sì céng xiāng shí de gǎn jué).

Good news! You can watch it for free on the Chinese internet with Chinese and English subtitles over at Bilibili: Or copy and paste this to your computer:

We highly recommend it when you get to WIFI~

You’ll thank us later – Watch it and let us know how many days you think he was really stuck in the time loop?

Are you a student or teacher?

Download a free ready-made lesson plan for Groundhog Day right to your phone: Improve you and your pupils’ culturalbility today!

Also, it’s free to share and to be used by whomever, wherever and whenever you want, whether in the classroom, a coffeeshop, or on your commute~ 👍🏽

Any wacky holidays like this from your country? We’d love to hear about them and/or feature them in a future article…