Phở is one of our absolute favorite foods in the world! Have you had it before? Don’t know what it is? If your mouth is not watering by the end of this post, then we don’t know what else we can do… be sure to watch the video at the bottom! 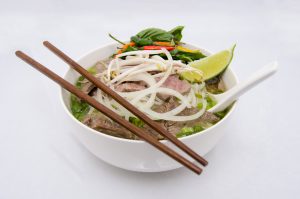 Pho is a Vietnamese noodle soup consisting of broth, linguine-shaped rice noodles called bánh phở, a few herbs, and meat, primarily served with either beef or chicken. Pho is a popular street food in Vietnam and the specialty of a number of restaurant chains around the world. Southern Vietnamese eat it for breakfast and occasionally lunch, whereas those from northern Vietnam consume it at any time of day. 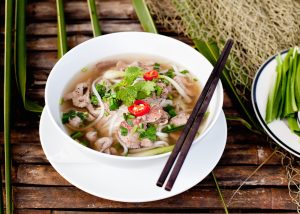 Pho originated in the early 20th century in northern Vietnam, and was popularized throughout the rest of the world by refugees after the Vietnam War. Because pho’s origins are poorly documented, there is significant disagreement over the cultural influences that led to its development in Vietnam, as well as the etymology of the word itself. The Hanoi and Saigon styles of pho differ by noodle width, sweetness of broth, and choice of herbs. 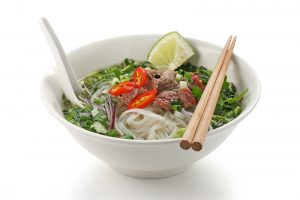 Pho is like the opposite of fast food. The amount of love an preparation that goes into a bowl of pho is unmatched by another noodle soup. It’s served in a bowl with a specific cut of white rice noodles in clear beef broth, with slim cuts of beef (steak, fatty flank, lean flank, brisket). Variations can include tendon, tripe, or meatballs in southern Vietnam.

Some people love pho so much that they will travel to Vietnam only to eat different types of pho each day! And some restaurants will offer a pho eating challenge, with prizes for finishing as much as 10 pounds (4.5 kg) of pho in one sitting. Sign us up!

Where’s the best pho you’ve ever had?