Haluhalo or Halo-halo (Tagalog: [haluˈhaloʔ] which means “mixed together”) is a popular Filipino dessert with mixtures of shaved ice and evaporated milk to which are added various ingredients, including boiled sweet beans, coconut, sago, jellies, tubers, and fruits. It is served in a tall glass or bowl. 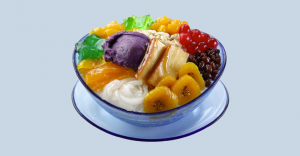 This colorful dessert from the Philippines has been compared to frozen yoghurt shops in the US or even 刨冰 (bào bīng) here in China. Many countries around Asia have similar dishes, but it is most famous from the beautiful land of 7,500 islands… 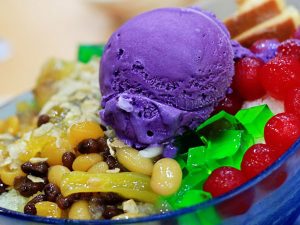 Most of the ingredients (fruits, beans, and other sweets) are first placed inside the tall glass, followed by the shaved ice. This is then sprinkled with sugar, and topped with either leche flan, purple yam (ubeng pula), or ice cream. And finally, evaporated milk is poured into the mixture upon serving. 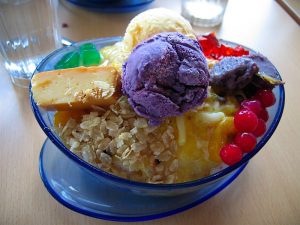 It is usually incorrectly spelled as “Halo-halo” (popularized by Chowking), but it is actually “Haluhalo” according to the Commission on the Filipino Language for it to not be confused with the Filipino word “halo-halo” meaning mixed up.

Haluhalo was featured as a Quickfire Challenge dish in the seventh episode of the fourth season of the American reality television series Top Chef. The haluhalo, which featured avocado, mango, kiwi and nuts, was prepared by Filipino-American contestant Dale Talde and named as one of the top three Quickfire Challenge dishes by guest judge Johnny Iuzzini of Jean-Georges. Talde also made the dish in a later episode. 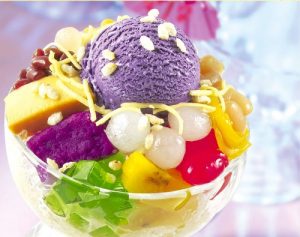 Haluhalo was also featured in an episode of Anthony Bourdain: Parts Unknown when its host Anthony Bourdain visited a Jollibee branch in Los Angeles. Bourdain praised the dessert and even posted a photo of Jollibee’s haluhalo on his Twitter account, which he described as “oddly beautiful.”

Since this dish is supposedly very easy to make, here’s a short video on how to make your own haluhalo at home! (英文字幕）

Who wants to make some for us!?